Buildings collapse as Israel carries out hundreds of airstrikes in Gaza

Israel carried out hundreds of airstrikes in Gaza into Wednesday morning, while over the same period of time Hamas fired multiple rocket barrages at Tel Aviv and the Southern city of Beer Sheva.

One multi-story residential building, a tower reported to be housing Hamas and other media outlets in Gaza City, was totally destroyed after Israel warned occupants in advance to evacuate, and another structure was heavily damaged in airstrikes.

At least 53 people have been killed in Hamas-ruled Gaza and six people in Israel since the violence escalated, according to officials. 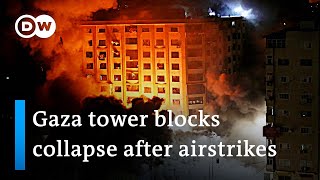 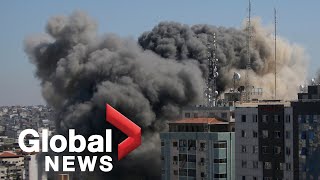 Troubles between the Jordan and the Sea: Israel/Palestine in Light of the Recent Violence

Mosul 360°: Rubble and ruins from Iraqi military op against ISIS

Violence intensifies over border between Israel, Gaza ahead of possible ground invasion

Lives on Hold in Lebanon